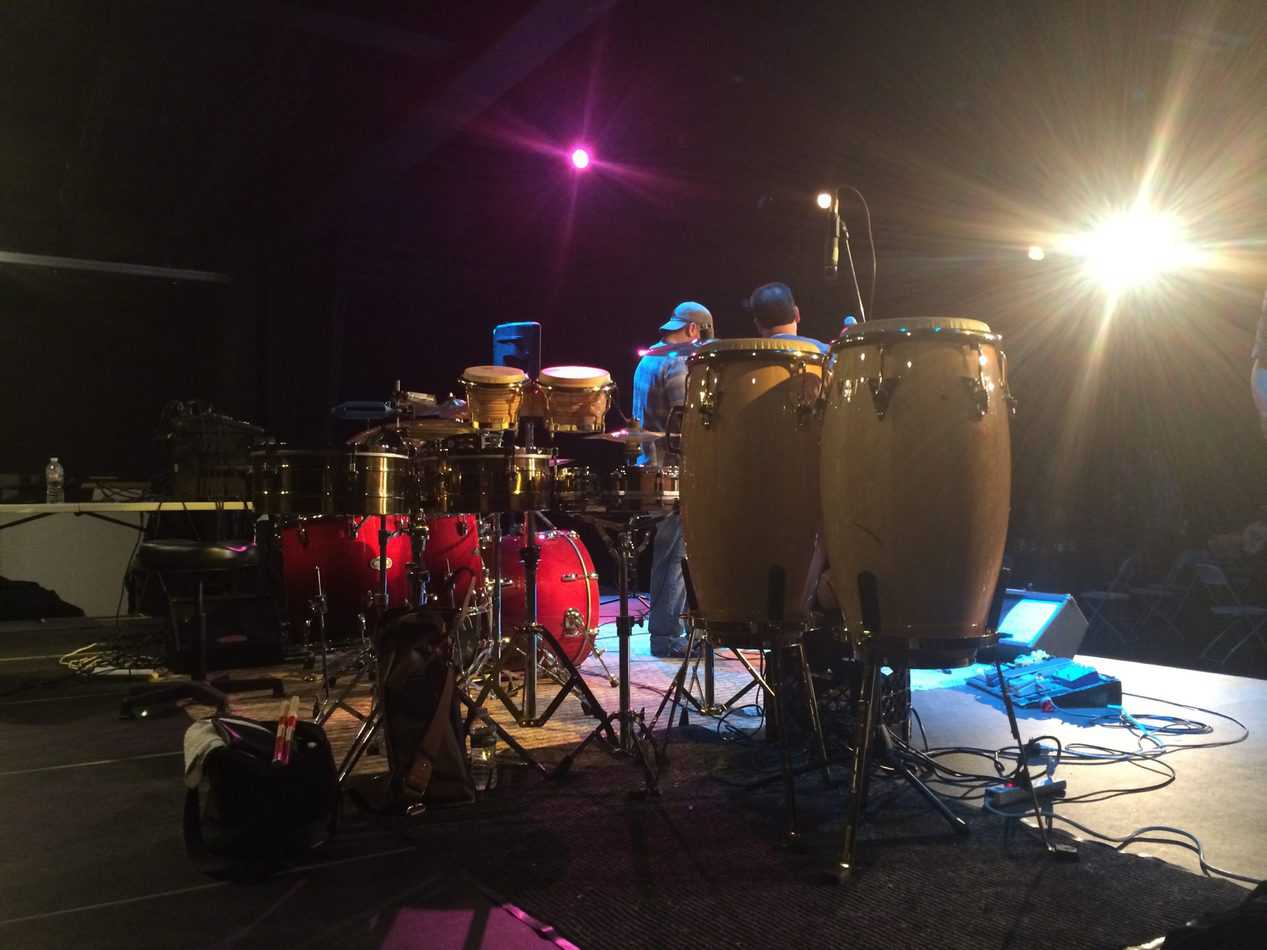 After defining your tones, slaps, and other sounds, playing congas is about the conga patterns. Some of the rhythms and conversations are traditional, while others are modern and improvised. So the question I’ve always asked is which conga patterns are the most important ones to know?

Conga drums were built for certain patterns, and Tumbao, a Cuban concept, is the most important one to know. Tumbao is the basis of several Cuban styles used in salsa music and timba, and it is one of the most adapted patterns in popular music like jazz, rhythm and blues, or rock ‘n’ roll.

Other common conga patterns from Cuba include guaguancó and bolero. Although the bolero is from Spain, the music was reinvented in Cuba and the Caribbean with Afro-Cuban rhythms and instruments. Many of the patterns listed below have a similar back story.

Some rhythms, like guaguancó, are more folkloric and less likely to be shaking the walls of modern night club, unless it’s Gloria Estefan. Other rhythms, like merengue, have moved from the street to the premier dance venues. Regardless of where these patterns are played, conga drummers must know them to be fluent on their instrument.

Get My FREE Copy

Tumbao refers to a rhythmic concept in Cuban music. The concept is most associated with the bass part for music derived from son cubano — mambo, timba, and salsa, to name a few. The conga pattern for most of these genres is also called tumbao.

The pattern includes a few different crucial elements. It’s comprised of open tones, slaps, and the marcha. The marcha is the rhythmic aesthetic and timbre you achieve when the heel and toe strokes are played on the drum.

Related: Conga Drums – A Guide for Beginner and Intermediate Players

The following examples include the basic tumbao that works for most son-based musical styles. The variations are more sophisticated in terms of their accents and conversational differences — substituting tones for slaps or adding slaps, for example.

Make sure you play the low drum part of the tumbao pattern on the 3 side of the clave. This is an expanded phrasing that’s played when the song arrangement reaches its loudest sections. The bongocero will also change to compana (cow bell) during this part the arrangement.

Related: How to Play Tumbao on Congas – 21 Variations

I want to learn more about the Conga Guide eBook on sale.

Congas and bongo provide the drum parts that establish most of the bolero rhythm section. The conga pattern is much like the tumbao with a slight twist with the open tones. The example shown below is an extended phrase. This is sometimes good to use when the low-high-low open tones sound too busy for the song.

The basic bolero is the second measure of the example below repeated until the song arrangement dictates otherwise. For harmony that changes often, the one-bar phrase sometimes makes the most sense. The extended phrase written below is often the way I play it so I can open up the groove and make it more interesting over the course of the song.

This is the most significant of the folkloric patterns on this list. Although it is used in popular music, guaguancó is a street and party music for having fun and dancing with friends and family. It’s one of the three major rumba styles — yambú, guaguancó, and rumba columbia (see number 5 on this list).

The drum parts include quinto, segunda (tres golpes), and tumba (salidor) and are played individually in a rumba setting. The quinto solos with the dancer and prescribed rhythmic parts for loose conversational improvisation. This conversation structure is most evident in the guaguancó from Matanzas, Cuba.

For one drummer with two drums, the example below is a good place to start. It sounds good with folkloric and modern popular forms, and it’s not tough to learn. It includes the tres golpes part on the segundo (11 ¾” conga drum) and the open tone conversation most associated with Havana-style guaguancó.

The tres golpes part is played with muted tones. Treat muted tones like open tones with your hands left on the drum. They have the energy of the tones without the resonance, so don’t confuse them with a touch. Play them out because they are significant parts of the pattern.

Merengue is traditionally performed with a tambora, which is a double-headed barrel-shaped drum held across the lap and played with a hand and a stick. The conga pattern is something that’s been added by larger orchestras that started playing merengues in dance clubs.

The toe strokes are one of the key features of the conga pattern. They establish an “a caballo” feel, which means that the rhythm gallups a bit like a horse. Add some improvisational rhythms in the style of the tambora to fill in and phrase with the song.

If the song is really fast and long, play with your right hand on the tumba (low drum) and your left hand on the conga. Sometimes too much energy is used moving your arm back and forth between the two drums.

The rumba columbia is a folkloric style in the Afro-Cuban music tradition. It’s in 6/8 time, and the African bell pattern is played with 3/2 clave. The first pattern includes the drum parts during the beginning of a song when it is lower intensity, while the second pattern is for the higher intensity ending of the song.

These 6/8 patterns are good to develop because they allow you to phrase over any division of three. For example, if you’re called to play congas on a shuffle that fills in a lot of the triplet inner beats, variations on these conversations would stand out in the mix without being a distraction.

Try adding slaps in different places in the pattern. I like to play two slaps before the low drum tones in the first pattern. The space in this pattern toward the end is also a good place to improvise, so practice playing short fills that don’t interrupt the groove.

Even if you never find yourself playing congas with a steel band, this pattern is a good one to have in your arsenal. Try it during a drum break, and add fills that fit with the style of the pattern. This groove also works for styles like hip hop, funk, and R&B.

When I think of funk conga patterns, I approach them like a drum set groove. The only difference is that I try not to play too many tones or slaps on top of the drum set kick or snare hits. Lock in with the drum set groove, and shift the pattern into the spaces with more syncopated rhythms.

Think of pop / rock patterns like tumbao that doesn’t have the marcha. But you don’t always want all of the heel and toe strokes in the pattern because it can become too thick and cover parts of the song that should be clear.

The pattern I chose for pop / rock is a Luis Conte part on a song called “1000 Years” by Sting. If he had played a straight tumbao pattern, the slaps on two and four and the snare drum on three would be a lot of backbeat phrasing that does not line up. The one slap, double tones on each drum, and the single tone to finish the phrase is better for the song because it adds melody and clarity to the rhythm section.

Cumbia is a Colombian folkloric style that’s been adapted to popular music in Mexico and the United States. Salsa and tejano bands in Texas, for example, play cumbia arrangements to mix up the Afro-Latin styles on their setlists.

The cumbia pattern is simple, so you don’t want to mess it up. It’s important to play it strong and in time. Lock in with the bass player and timbale (or drum set). For phrasing, you can play the second variation or add sparse fills within the style. Listen to cumbia bands for improvisation ideas. You can pick it up in a few songs.

The mozambique pattern is derived from the Cuban street rhythms of comparsa. It’s adaptation to Latin jazz in New York by band leaders like Eddie Palmieri added more variation to the concept. Furthermore, drum set player Steve Gadd brought an adaptation of the pattern to the pop / rock world on “Late in The Evening” by Paul Simon.

I think of the mozambique as a heavier groove that works nicely on a Latin jazz arrangement when the song needs the support. It’s sometimes a busier phrase overall, so it doesn’t work for everything.

Once you’ve learned the traditional patterns, I encourage you to try your own variations and fills. Mess with the tones and slaps to create something new for your music. It’s the only way you’ll develop a style that people identify with you as a player.

“Congas and Bongos – 10 Differences Between These Drums”