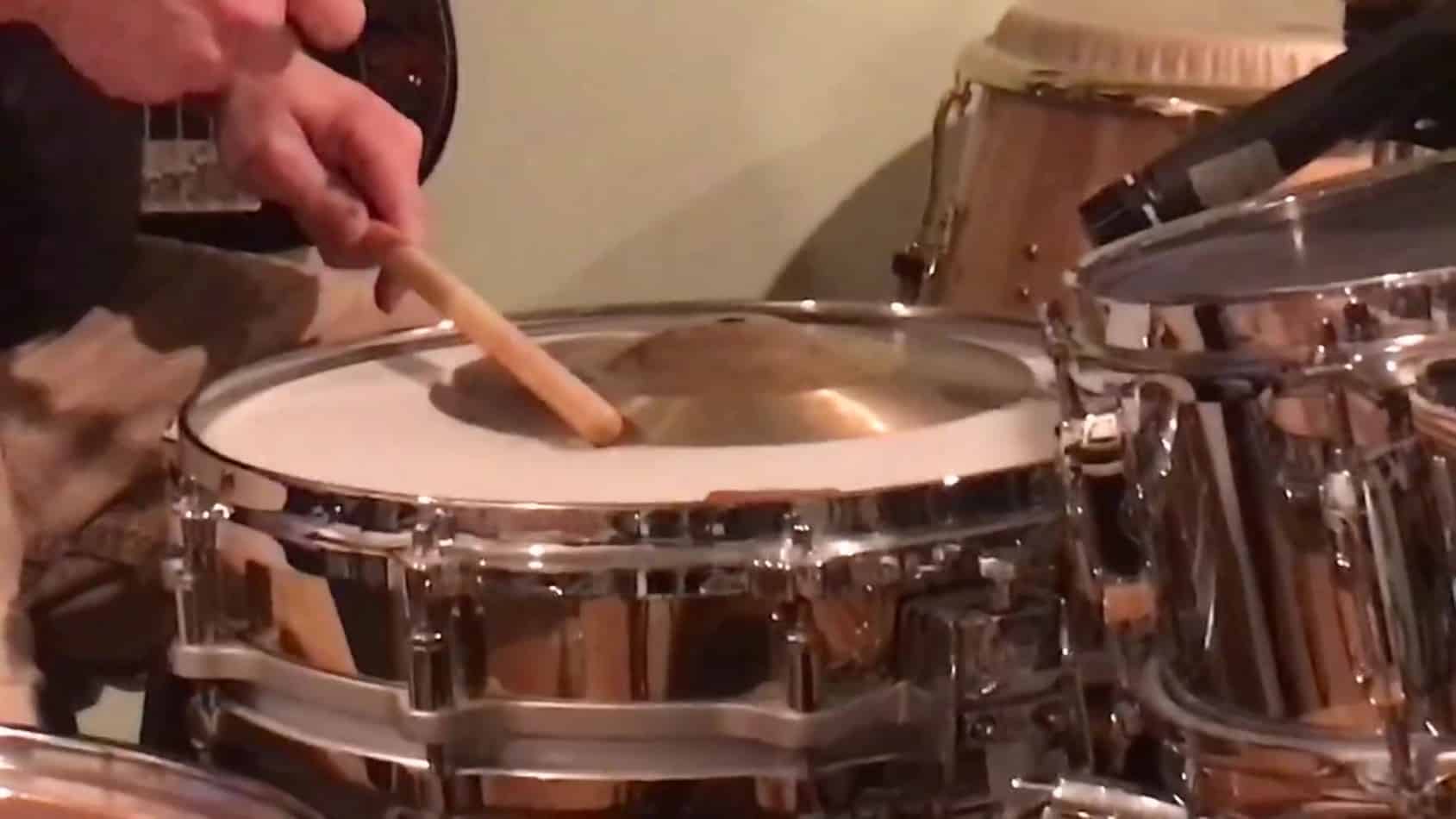 Getting a good snare drum sound involves a lot of factors, like tuning, drum head choice, sticks, the type of drum, and so on. Sometimes a good quality snare drum isn’t enough. Sometimes you need to think beyond the basic factors and try a few tricks.

Over the years, I’ve observed several different ways to dramatically change the sound of a snare drum. Add a splash cymbal, a tambourine, an old drum head, or just turn off the snares. Whatever you choose, consider the variables of the drum and exploit everything in front of you.

Songs need drums that ring and drums that don’t ring much at all. Some arrangements require more phrasing from the drummer because not much else changes from one part to another. Regardless of the reason a different snare drum sound would work better, it’s important to have a bag of tricks when the need presents itself.

Why change the snare drum sound?

Changing your snare drum sound is a simple task that yields huge musical results. The simple answer is that it’s about phrasing. Use a cross stick when the song is quieter in the verse, and play a rim shot during the chorus when it’s loud. These aren’t rules, but it works for most songs.

The one thing I’ve learned from studying various drummers and percussionists is that it’s all a matter of preference. Maybe your one snare drum sound is versatile, and you think it works for every song. Perhaps you are more like Steve Jordan and prefer to consider the snare sound for every song. He changes snare drums more than John Mayer changes guitars. Whatever your approach, you have to like what you hear.

I like using clap sounds on a dance tune that makes people want to get up and dance. Combine that with a real snare drum and you have a new sound for your track. You could choose to replace your snare sound digitally or add a trigger, of course. But you could also make the sound more organically.

Let’s take that same hand clap sound and simulate it with other materials or instruments. Try using goat nails on your snare as the implement. Hold them tight or hold them loose. It doesn’t matter until you find the sound that’s satisfying. If you hold them loosely, the goat nails could sound like people marching in the street. This could be the aesthetic you’re looking if the song is about protest, unity, or honoring the troops, for example.

It doesn’t have to cost much.

Use what you have. Are you looking for a dry, slappy sound? Throw a piece of paper on the drum. I’m sure construction paper would sound differently than 28-pound print stock. I’d even try a piece of cardboard.

Place a shirt or a towel on your drums, and be Ringo for a session. The shirt and towel have varying degrees of muffling effects that work for backing tracks or the main ax on so many songs. Plus, you can add a tambourine on top of the shirt and it won’t make any unwanted sounds vibrating on the drum.

I’ve explained several ways to change your snare drum sound. Within these ways, you also have variations that don’t leave you reaching for your wallet. For example, with a tambourine on the shirt (on the drum), you can choose to hit the tambourine directly or the drum head — one setup with two different yet related sounds. Throw off the snares, and you have four sounds with one setup.

Place these items on your snare drum head or use some of them as implements. This list is not exhaustive, so experiment with some of these ideas and share your variations in the comments below.

Some of my favorite implement changes include brushes, soft mallets, rods, and even adding percussion to your sticks. Try taping an egg shaker to a stick or screw on two sets of jingles from a broken tambourine.

Implement combinations are great, too!. Change your snare drum sound by playing cross stick with one hand and the ride part with a brush on the batter. Practice some of these ideas and you could play so many jazz singer gigs with just a stick bag, snare drum, and some percussion toys.

Here’s my list of snare drum sounds as demonstrated in the video. It seemed like five examples was enough to get the point across for the video. The backing tracks were songs I thought of to make it more fun. I played all of instruments as part of a challenge to myself to produce more music this year.

Take an old drum head and place it upside down on the batter head that’s currently on the snare drum. This will seriously cut out some resonance and overtones, almost like a gate effect.

In a live setting, I like using it to simulate backing tracks that were on the original studio recording. It provides a sound that’s easier to control and provides a contrast to your main ax. Throw the old head on a side snare to keep it ready for the phrases in the songs that warrant that snare drum sound.

2. Tambourine on the drum

I think I could do a whole video just on tambourines and snare drums. I didn’t get too creative with this part of the video (below) because it can be very simple. Place a tambourine on your snare drum and hit it.

Okay, it’s not that simple. If you control the rebound of your stroke and leave the stick on the tambourine, you will have more control. In the video, I use rods to add some control while softening the attack of the stick on the wood tambourine.

As mentioned above, experiment with towels on the head before placing the tambourine on the drum. The snare drum sound can become easier to control in both live and studio settings. You may also notice that the towel keeps the tambourine from moving around the drum.

This is one of my favorites to play but not to describe. I don’t really have a good name for it. It’s a flam comprised of a cross-stick and a ping (a type of rim shot). I use the cross-stick as the grace note and the shot for the primary stroke, but I don’t think that matters too much.

Play around with the openness of the flam as well as the timbre of the snare drum. Throw off the snares or mute the drum. Throw a shaker percussion toy on the side and dirty the sound a bit.

I like to use this snare drum sound during breakdowns when the drums and vocals take over the arrangement. It also works for backing tracks or an alternate backbeat for phrasing. The only concern I have, like most of these sounds, is potential for overuse to take away from the general effect.

Simply turning off the snares is an amazing way to use a snare drum differently. It’s great for Latin rhythms as well as some of the more progressive rock grooves.

I can still remember hearing Tool for the first time and thinking that Danny Carey’s snares off grooves were perfect for the songs. If you don’t know what I mean, spend the better part of an hour listening to some of Tool’s hits. You will find a groove with snares off, for sure.

Snares off also changes the resonance and tonality of rim shots and cross sticks. In the video below, I play a groove that incorporates some cross stick, muted batter hits, and rim shots with the snares off. The groove was inspired by Earl Harvin and will make an appearance on an album I track one of these days.

5. Splash cymbal on the drum

I saved this one for last because it’s just so easy to be different with a splash cymbal on your snare drum. It doesn’t matter how many times I do this, someone is always amazed at the huge effect it has on the groove.

Place an 8- to 10-inch splash cymbal on the batter head. In the video, I used an 9-inch Zildjian Hybrid and played it with the shoulder of the stick on the ride area of the cymbal. The snare drum sound is dry if you bury the stick in the cymbal.

Try playing the bell of the splash in place of a hi hat. Experiment with different implements, too. Rods or brushes on the bell while playing hi hat or ride-type patterns would work for a lot of situations.

Don’t stop at splash cymbals. Try small gongs and tams. And don’t stop at snare drums. Place the gong or tam on your rack tom. This can replace a snare drum sound with excellent results, and you’ll still have your snare drum available with it’s already awesome sound that keeps you coming back for more. I truly love drum sounds that much!

If I were to make the video above today, it would have been titled similarly to this blog post. The possibilities are endless. Since I uploaded that video to YouTube, I’ve learned more ways to change my snare drum sound. It’s not only about being different. Changing your drum sounds can increase your creativity and inspiration.

The goal is to think beyond the initial intended use of the instrument. Snare drums came from the European rudimentary marching tradition. The band and symphonic orchestras brought the drums inside and off the parade grounds. Jazz musicians placed the snare drum into the modern pop music context.

Now, we’re making hybrid acoustic-electric drum kits and adding different timbres to the drum to stand out in creative and unique ways. Further, some of the snare drum sounds I’ve discussed here are acoustic simulations of electric drum and percussion sounds.

The sky’s the limit when it comes to snare drum sounds.