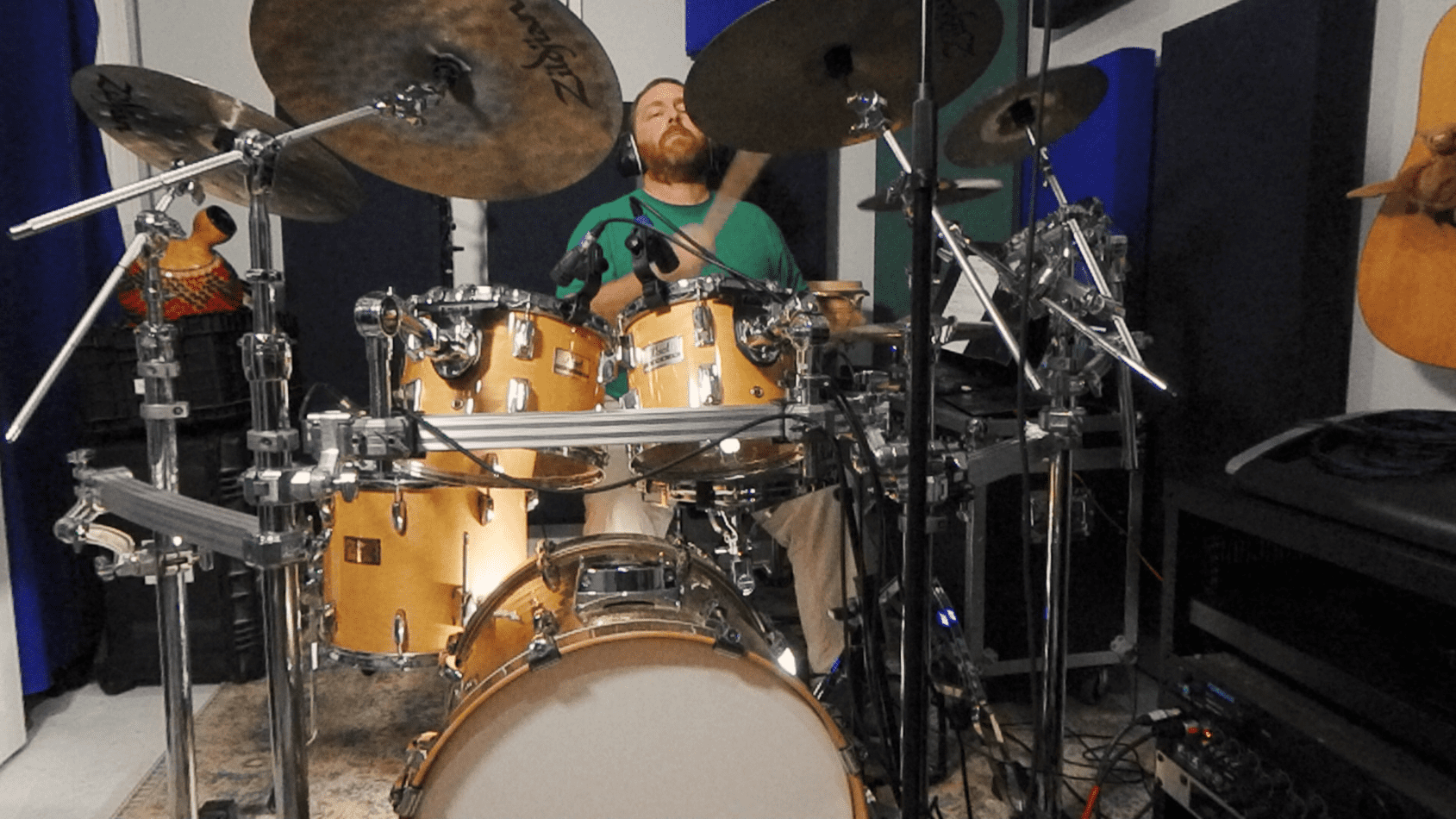 Shuffle beats are more than just a groove we often associate with the blues. Like any style, they come in several shapes and sizes and work for a variety of popular music.

A shuffle beat is a rhythmic pattern that alternates long and short spaces between notes. This creates a skipping effect from beat to beat consistently throughout each measure. It’s a rhythm most easily notated by triplet eighth notes with the middle of each triplet grouping missing. This establishes the skip, and the space in between the first and third triplet eighth can vary to create different shuffle feels.

Shuffle beats are often described as more open when the rhythm follows an evenly spaced triplet pattern. This is all in relation to a more closed or tighter shuffle interpretation.

A tighter shuffle is created when the space between the two closest notes are closer than the open feel. This tightens the pace between the notes and resembles more of a sixteenth note space than triplet eighth notes.

The shuffle beat can be played in various ways on different instruments depending on the genre of music or regional tastes. Essentially, how open or tight the interpretation and where accents are placed establish any number of different styles of shuffle beats.

Origins of the Shuffle Beat

Blues. Rock. Country. They’re all branches from the same tree. Their roots go back to the music developed in the United States by slaves, taken from Africa, and forced to work and live under some of the worst conditions.

But their African rhythms and musical aesthetics never faded. They were reinvented through work songs and field hollering and the shuffle beat became the fundamental groove of the blues, country, and early rock and roll.

Long before the drum set was a staple in the blues rhythm section, the shuffle rhythm was played by guitar and heard through the rhythm of the vocals. Essentially, a shuffle drum beat on drum set was played to support the rhythm already in the song.

Perhaps you are shuffling the snare drum, cymbal, or bass drum. Each choice could serve the music in its own way and establish a style of shuffle that sounds and feels a little different.

The following types of shuffle drum beats are named based on what I’ve learned over the years. Some of these beats might be called something different somewhere else, but the drum beat concepts could still be the same.

The country shuffle is the lightest of the shuffles on this list. It’s a shuffle on the cymbal, ride or hi-hat, and a boom whack on the kick and snare.

It’s called the country shuffle because it’s the beat you hear on so many country albums, even before full drum sets were being recorded. Early recordings use a variety of things like brushes on a snare drum or even drum sticks on a guitar case.

The Texas shuffle is a shuffle rhythm on the snare and cymbal with a four on the floor kick drum – four quarter notes on the down beats.

The roots of the Texas shuffle point back to Ray Price, with his emphasis on all four downbeats of the 4/4 time signature. Price’s music is more Western swing then the blues that we often associate with a Texas shuffle drum beat. But back then the difference between blues and country music might have only been the color of your skin.

If you listen to a song like “High Lonesome” by Jimmy Reed, you’ll hear the guitar playing the shuffle and the drums playing a boom whack with a little shuffle. A year later, in 1955, Jimmy recorded “You Don’t Have To Go,” and you can clearly hear the hi-hat playing the shuffle rhythm.

By the early 1960s, you’ll hear more and more drums on recordings. For example, The drummer on “Hide Away” by Freddie King (1961) is playing Texas shuffle like the one notated below.

And, of course, by the time the 1970s rolled around, the Texas blues rock scene was playing a lot of Texas shuffle as we do today. Listen to bands like The Fabulous Thunderbirds and Stevie Ray Vaughn and Double Trouble.

The flat tire shuffle is similar to the other shuffles in all ways with the exception of the snare drum. The snare drum rhythm is on all of the shuffle upbeats.

Listen to songs like “Inside the Pocket of a Clown” by Dwight Yoakum and “Old Brown Shoe” by the Beatles.

Out of all of the items on this list list, “rock shuffle” is the name that’s most made up by me. I didn’t know another way to describe the shuffle beat that John Bonham plas on “Fool In The Rain” or the beat that Jeff Porcaro plays on “Rosana.”

Rock shuffle beats include a variety of kick drum variations and either snare on counts two and four or count three. The first example accents the backbeat with a rimshot on beats two and four.

The unaccented strokes on the snare, however, are the most important feature of this shuffle beat. These ghost notes are quiet but have a huge impact on the feel and overall sound of the groove.

The rock shuffle beat below is a halftime groove. The rimshot on the snare drum on beat three establishes this feel. Notice that this beat is two bars. This example was written to provide a more extended phrase, similar to Jeff Porcaro’s shuffle on “Rosanna” (see section on Shuffles from Famous Drummers below).

Try playing this shuffle beat with the ghost notes on the snare drum. Maybe it sounds good for one song or another. But can you imagine if Jeff Porcaro decided to leave them out on “Rosana?” It would be unthinkable.

The heavy shuffle simply means that you are shuffling the kick drum. It could also mean that the toms are being shuffled instead of a cymbal pattern, but the concept remains that the shuffle rhythm is played on low sounding drums.

Listen to songs like “Children of the Grave” by Black Sabbath or “Immigrant Song” by Led Zeppelin. See the transcriptions below for more on Bill Ward and John Bonham.

Many of the following shuffle beats look similar on paper, but the way these drummers interpreted the rhythms is entirely unique.

The “Purdie Shuffle” is famous for its nuance and impact on the groove. It’s to play this groove if you’re not Bernard Purdie, but we all get better trying.

One of the nuances not noted below is the hi-hat pedal work. Bernard Purdie lifts his foot so slightly. It’s as if he’s tapping his heel to the downbeats, and once in a while the fot comes up enough for a quiet slurp.

In terms of dynamics, the kick and snare are heavy and the hi-hat is subtle. The ghost notes on the snare drum are very subtle. It’s hard to hear them on the original album, but Bernard Purdie plays them on his teaching videos.

The groove is mostly the same phrase with a few kick drum variations and some drum fills on the transitions and ensemble figures.

The hi-hat work is especially important on this groove, especially the slurp on the third triplet eighth on beat one. If you listen to the original track, you’ll hear that John Bonham plays some more nuanced hi-hat work, which is probably because his heel is tapping to the beat and toes release the pedal slightly from time to time.

“Fool In The Rain”

This is a fast halftime shuffle over a two-bar phrase for the Toto hit song “Rosanna.” It features a syncopated kick drum rhythm and ghost notes on the snare drum filling in between the hi-hat shuffle rhythm.

Jeff Porcaro explains this shuffle in his classic instructional DVD. He said it’s a combination of the Purdie shuffle and John Bonham’s shuffle beat on “Fool In The Rain.”

Pay attention to the accents on the hi-hat and the stick height on the snare drum ghost notes. Control over these elements can make all the difference for shuffle beats that sound and feel good.

Is it straight or swing? The feel of this first James Gadson groove is amazing, and I think it’s because of how he interprets straight and swing rhythms.

Since the hi-hat part is sixteenth notes, relative to the tempo, it’s one of the faster shuffle beats on this list. When any swing pattern is played faster, the largest space between the notes gets smaller.

This Bill Withers song (below) is at just the right tempo for the groove to feel a bit swing and a bit straight at the same time. You can feel either, depending on which one you’re listening for.

This shuffle beat is a variation on the Texas Shuffle. Instead of the ride cymbal part shuffling with the snare, Chris Layton is playing straight quarter notes.

When you play this groove, make sure you let the quarter notes on the ride lock with the bass and guitar. It’s such a simple part, but that means it has to be respected. I like to enjoy the ride cymbal sound when there’s so much space for it to ring out.

This heavy shuffle is a great shuffle beat to jam to, especially if you are just starting to develop shuffles. The tempo isn’t too fast or slow, and the overall pattern is simple enough to focus on the shuffle in the kick.

Bill Ward’s drumming is legendary, and his heavy shuffles can be heard all throughout the Black Sabbath catalog.

“Children of the Grave”

On “Hand of Doom,” the shuffle groove kicks in around two minutes into the song. This section of the song has a lot of fills and ensemble hits, so it’s a good song to practice getting into fills and back into the shuffle beat.

The groove below is a variation on the shuffle beat Bill Ward plays in the interlude (above). It starts around 3:30 and reminds me of a Motown type of groove.

link to Sizzle Cymbal - How to Add Rivets and Other Methods

Continue Reading
link to What Is Latin Music?

If you listen to a mambo or bossa nova, it’s easy to say that it’s not the same rhythmic style. But there’s something similar about the two. We often call this generalization “Latin music,”...