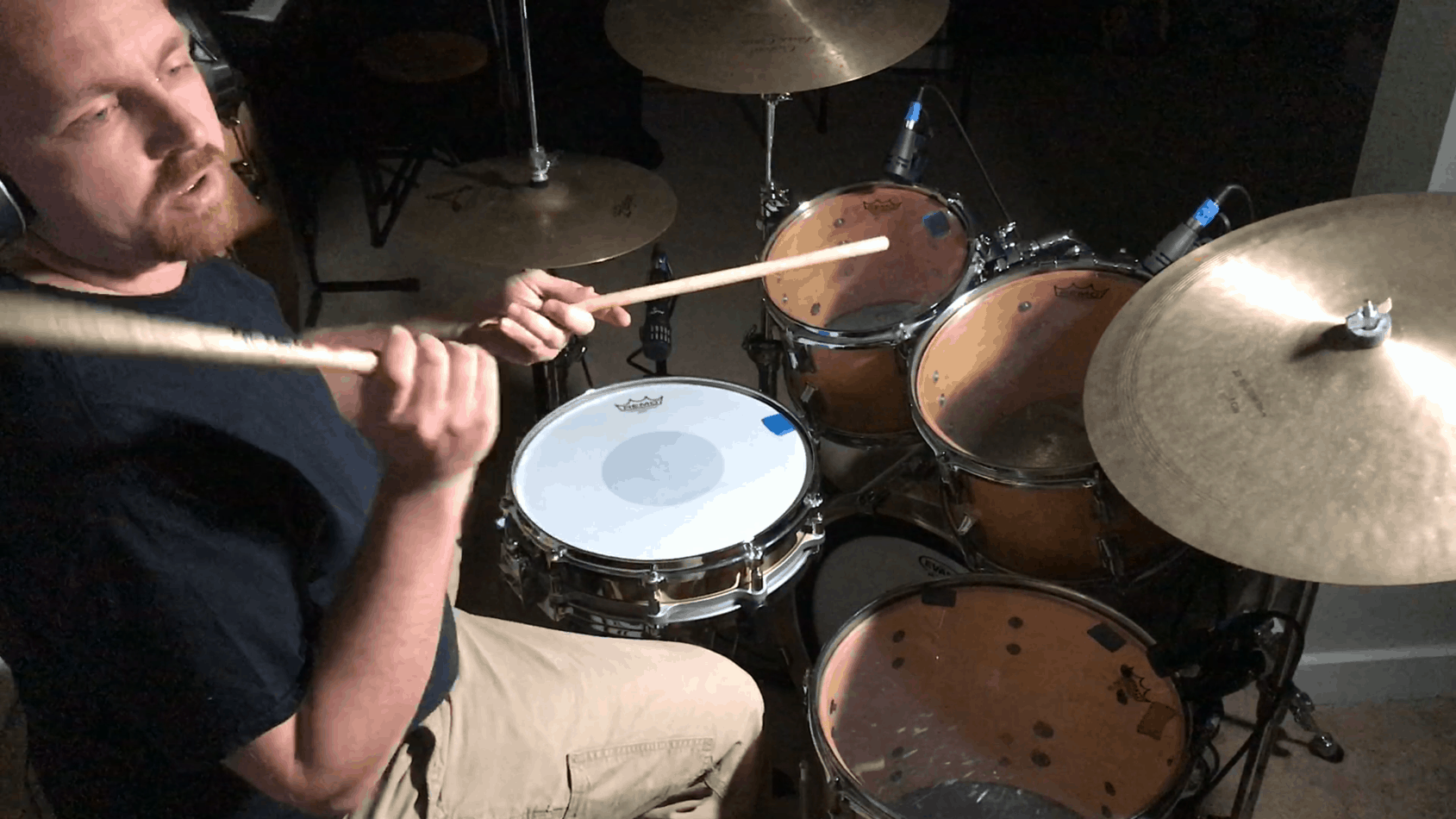 The “money beat” is the first groove most drummers learn to play on the drum set. It’s simplicity and strong backbeat accents have been used to get people to dance more than almost any other other beat. But why does this basic drum beat work so well?

The money beat is a basic drum beat that has a “boom” and a “whack.” The boom moves us forward and the whack holds us back, creating a tension and release to which people like to move. It’s easy to listen to because everyone knows what comes after the “boom” — yep, the “whack.”

You may recognize the money beat from songs like “Billy Jean” by Michael Jackson or “Highway to Hell” by AC/DC. These songs, and others, are analyzed below. But first, let’s go over how to play the money beat.

How does the money beat go?

Let’s add the cymbal pattern. The first basic pattern is a cymbal hit on each beat. This means you’ll play a cymbal — hi hat, ride, or crash — at the same time as each drum hit.

The second cymbal pattern adds a cymbal hit in between each hit in the first pattern. Count this pattern 1 & 2 & 3 & 4 &. Remember, when you add the drums, they are on the numbered counts.

What’s so “money” about it?

The money beat has been on so many songs and albums. It has literally made a lot of money for the music industry. You will here it on pop, rock, country, heavy metal, and just about any style of music.

From the drummer’s perspective, it’s an easy groove that supports so many songs very well. In a way, the professional player is making a lot of money for the effort. But don’t let the groove fool you. It’s not easy to make the groove feel great or phrase musically.

The drummers who know when to play the money beat and how to play fills and variations on the groove will make money, for sure. Although, beginners and non-drummers can learn this groove in about two minutes, it takes a mature player to play it in time, with proper dynamics, and to phrase with a song and play the ensemble hits smoothly.

What popular songs have the money beat?

The money beat comes in different shapes, sizes, and tempos. Some drummers play it with accents on the hi hats like Phil Rudd on “Highway to Hell,” while others play more of a shuffle feel like Ringo Starr on “Help.”

This track was played by Leon Ndugu Chancler. His hi hat pattern mostly has accents on the downbeats with the rest of the eighth notes unaccepted. What makes this groove sound different than other money beats is the crispness of the drums and how the reverb is so subtle yet adds a character and space to the drum mix.

Phil Rudd plays a money beat with an eighth note on the & of beat 4. It’s like the heartbeat groove (see below) that’s been shifted two beats to the right. This groove leads with the kick back to the top of the groove. It works great for songs like “Highway to Hell” because it compliments the guitar riff by accenting the ends of the first few rhythms.

Ringo chugs along with a shuffled hi hat pattern that is hard to hear. The drums on these early Beatles recordings are not out front or even very clear, so it can be hard to make out the unaccented notes in the hi hat pattern.

This is the perfect example of the money beat supporting the song. Lars Ulrich played sloshy hats with accents on all of the eighth notes and no kick drum variations outside of a few fills. If he played more kick drums or snare hits, it would be too much. The heavy guitars and bass are already supporting the rhythm needs of this metal classic, so the drums only make the song better through simplicity.

“Rolling in the Deep”

The drum phrasing on this song is great. It starts with mostly kick, and the full groove doesn’t kick in until the chorus. It’s a four on the floor kick drum pattern (see below), so it’s a variation on the money beat. But the hi hat slurps and tasty drum fills in the chorus are what add the character to this groove. It sounds like the drummer is into the song, and how could you not be?

This money beat is phrased with fully accented open hats for the main riff and the floor tom sans cymbals for the classic Ramones call out — “Hey ho let’s go!” It’s punk, and it sounds like great. It feels like a punk drummer by the way it generates a little tension by pushing the tempo, like someone who dances at a concert and increasingly becomes more physical with the surrounding dancers. It’s harmless yet aggressive.

If you need a beginner lesson on how to hold drum sticks, for example, check out these 5 free lessons.

What are the variations on the money beat?

The money beat is first of several rock beats you can learn quickly. By adding, subtracting, or shifting the rhythms, you can vary the money beat to make entirely new grooves. Most of the popular music genres use variations composed with these kinds of adjustments to the money beat.

The cymbal pattern is a good place to start varying the groove. You can add accent patterns to change the feel or style of the groove. For example, you could play accents on the downbeats (1 – 2 – 3 – 4) or the upbeats (all the & counts).

Related: how to get different sounds out of cymbals.

Hi hats have so many possibilities. You can play them tight, loose, on the edge, on the top, or slurps. Even the slurps and loose hats can be two or three different sounds depending on how loose or tight the cymbals are in relation to one another.

The kick drum sounds good on beat 1 and 3. How would it sound if you added another hit to the & of beat 3? It would probably sound like so many of the great classic rock songs. With the addition of one hit in the right place, you can transform the groove and ultimately the song.

Two kick drum hits on beats 1 and 3 gives you the “We Will Rock You” groove (second groove above). It’s also the groove for other songs like “You Don’t Know How It Feels” by Tom Petty and “The Joker” by the Steve Miller Band.

The “heartbeat” pattern is the third variation on the kick drum (first groove below). This variation is common in country music, especially the older stuff. The added kick drum to the basic money beat is on the & of beat 2.

These variations play around with patterns built by grouping eighth notes and sixteenths in different orders. Each order presents a different kind of gallop feel to the groove.

The train beat is one of the most recognizable variations. It’s often played with a varying degree of shuffle. It chugs along like a train skipping across the seams in the tracks. You’ll hear it played on a lot of country songs, most notably “Folsom Prison Blues” by Johnny Cash.

Floor tom grooves are my favorite. I love cymbals, but sometimes you need a break from a good thing. Why not play a floor tom to add a thicker low end quality to the groove. It’s awesome on bridges and transitions, especially when the lead part or lyrics really want to come through.

And let’s not forget percussion. You can replace the cymbal with a cowbell, blocks, or even the rim of a tom. All of these sound great and provide variation to the money beat. The goal isn’t to see how many different sounds you can make. It’s to find the sound that makes the music sound the best.

The money beat is easy to learn, and it’s easy to play for many songs or if you’re jamming with other musicians. It’s a great place to start playing drum set because you can get the feeling of success on the instrument almost immediately.

What’s important to remember is that all of these slight variations make huge changes to the groove. The same can be said for how you play the groove. Is your cymbal pattern straight or shuffled? Does the kick drum feel like it moves forward and the snare is laying back?

These aren’t requirements of playing the money beat. They are the human element — the things that make us very unlike a drum machine.